Richard Branson is the founder of Virgin and one of the world’s most successful entrepreneurs. He also has a personal brand as large, if not larger, than that of the company he created. How did he build that brand?

This small business accepted orders for records via mail, with Branson posting the records himself.

Little did anyone know that this was the start of what would become one of the world’s largest business enterprises.

Today, Virgin is a titan of the business world. The brand encompasses everything from music to travel. At one point, there was even a cola that carried the Virgin branding.

It’s one of the most recognisable brands on the planet. Yet many would argue that Richard Branson is even more recognisable than the business that he created.

That’s because Branson understood the importance of building a personal brand from an early age.

That’s something that all storyshowers have to do. You are the most powerful part of the brand that you hope to create. If audiences don’t connect with you, they’re not going to care about your message.

How do you build a brand like Branson? Here are the five techniques that Richard Branson used to establish his personal brand.

As the world moved into the social media age, Branson quickly noted the importance that content plays in personal branding.

He uses social media as a tool to build his credibility.

You need only look at his LinkedIn profile to see how effective Branson’s content is. He has over 10 million followers on that platform. This makes him one of the most followed professionals on the planet.

He would not have amassed that following without great content. Branson has a “cool” aura around him that actually reflects onto his businesses. Without him, Virgin would be just another airline or just another record company.

With him, Virgin’s various businesses are amazing places to work at and something that everyone wants to be a part of. That’s the power of personal branding.

He encourages that viewpoint through the way that he structures his LinkedIn blogs. He’s always wearing a smile in the pictures that he posts and he’s always surrounded by happy people.

His posts use attention-capturing headlines about achieving a work/life balance or having passion.

Branson structures all of his content to build credibility for the idea that he’s a cool and fun-loving guy. Virgin benefits by association with him.

What do you think of when you think about Richard Branson?

The image in your head isn’t of some dour CEO who works behind the scenes to make his billions.

Instead, you’re probably thinking about all of the stunts that he’s pulled over the years.

Perhaps you’re reminiscing about his several attempts to circumnavigate the globe in a hot air balloon.

Maybe you remember when he put on a wedding dress to introduce Virgin Brides.

Or you might think about the time he turned up to the launch of Virgin Galactic in a spacesuit.

All of these stunts showcase his wacky and cool persona. While his content builds credibility, it’s his actions that show people who he is.

Again, this ties into his personal brand.

Do you remember Virgin Brides?

That company may be long gone but you still remember Branson’s PR stunt for it. You remember him dressed in a wedding gown even though nobody connected to the business behind the stunt.

That’s one of the secrets to how Branson overcomes failure. His PR efforts strengthen his personal brand even when one of his business ideas doesn’t work out.

He’s showcasing his personality at every turn and using it to show people who he is.

That reinforces his personal brand, which means people still want to hear about his next business venture.

We often speak about the importance of authenticity at Speakers Institute.

If your audience doesn’t believe in what you’re showing them, they’re not going to engage emotionally. Your words will just pass right over their heads.

Branson is a master of building authenticity into his personal brand.

At no point do you get the impression that Branson’s trying to be something that he’s not. He’s unmistakably unique. You get the feeling that he’d do all the stuff that he does even if the cameras weren’t on him.

Again, that’s important to the cool and wacky image that he wants to portray. Branson’s clearly a risk taker. He’s shown it in business and he shows it with the things that he does.

Being a risk taker is one of his personal values.

Now imagine if he didn’t like taking risks, yet he still tried to do the things that he does. You’d see a huddled up and shaking man taking to the skies in a hot air balloon. Everyone knows he doesn’t want to be there so everybody sees right through the stunt.

But with Branson, you know he’s loving every minute of it. This creates an authenticity that causes people to connect with him.

That’s something that you can take into your speaking career. Don’t try to hide behind a mask of what you think people expect from you. Show some vulnerability. Be who you really are when you’re on stage.

That’s how you get people to engage emotionally. You’re showing them that what they see isn’t an image that you’re trying to craft. It’s who you are and what you believe in.

Technique #4 – Use Your Personal Values to Identify Your Target Audience

That’s an important lesson for every speaker. You have a story to show people, but it’s not going to resonate with everyone.

The people who will connect with you depend on the story that you’re showing. It may be that your message resonates with aspiring entrepreneurs. Perhaps you can inspire sportspeople or music lovers.

The point is that you have a target audience. And if you can’t identify that audience, you can’t build an authentic personal brand.

Your values determine your target audience. Again, you can look at Branson’s cool personality for this. His values mean that he appeals to younger people who see him as a great example of what a businessperson “should” look like. They want to achieve his level of success while still being themselves.

Branson reaches out to these people through his actions and his content. He’s quick to offer advice to young entrepreneurs via social media. He funds and takes part in a lot of start-up events.

He’s been there and done it, which means he has valuable experience to share with an audience that wants to follow in his footsteps. His action puts him in front of that audience, which builds his personal brand.

Again, you need to think about what makes you who you are. It’s a combination of your personality and your experiences. Consider what you can offer based on that combination. Then, find like-minded people who share your values and want to learn from your experience.

Technique #5 – Commit to Your Brand

Branson wouldn’t have built his personal brand if he wasn’t committed to it. If he just popped the occasional post on social media and left it at that, nobody would connect with him.

He stays active at all times. He’s constantly responding to questions and working on his brand.

As he says: “Branding demands commitment; commitment to continual re-invention; striking chords with people to stir their emotions; and commitment to imagination.

“It is easy to be cynical about such things, much harder to be successful,” he adds.

Building your personal brand takes a lot of work. It’s not something you can achieve with the minimum amount of effort.

That’s something you have to remember when you’re getting stuck into your “real” work. It’s easy to just put your head down and shut everything out. You may need to do it sometimes just to complete important tasks.

But you have to make time for your brand as well. You need to keep showing people who you are so that you can keep them engaged. Branson does that with the content he shares and the way he interacts with people. He does it with his PR stunts and his advocacy for start-ups.

He’s constantly putting himself out there and committing to the personal brand he’s created. 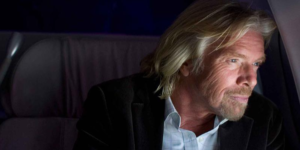 Richard Branson may be one of the best examples of personal branding in the world. He’s as well-known as the business he founded. In fact, his personality is so tied into his businesses that his personal brand has an impact on their success.

As a speaker, your personal brand means everything. If you can’t get people to engage with you, they’re not going to care about your story.

These techniques will help you to build your personal brand. However, you still need guidance to be a great storyshower.

Speakers Institute can help. We encourage you to take the following steps to bring your speaking career to the next level: