People in the UK revere Winston Churchill as a great wartime leader. However, it’s his speaking skills that stand out more than his tactical knowledge. Here’s what you can learn from one of his most famous speeches.

Some see him as one of the greatest politicians in British history.

Others see him as an amazing military tactician who led Britain through one of the most turbulent times in its recent history.

At Speakers Institute, we see Winston Churchill as one of the greatest storyshowers who ever existed.

That’s an opinion that many people share. Churchill built much of his reputation on his ability to deliver the right words at the right time. When his nation needed a strong leader, he was the man who stood up and inspired in the face of adversity.

At no point was this truer than when he delivered his famous “We Shall Fight Them on the Beaches” speech. Churchill reinvigorated a nation’s courage and pride, with his speech serving as a call to arms for the exhausted British troops.

In this article, we’re going to take a closer look at this speech to see what made it so special. We’re also going to offer a few tips that may help you inspire people in the same way that Churchill did. 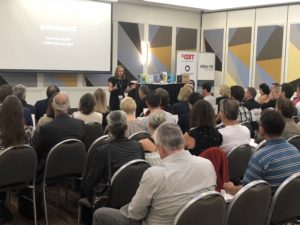 Conciseness is the future of storyshowing.

Interestingly, Churchill understood the power of conciseness in the 1940s.

From start to finish, his entire “We Shall Fight Them on The Beaches” speech lasts for two minutes.

In those two minutes, he mixed eloquent articulation with a blunt message.

Delivering a rapid-fire sets of facts and figures isn’t going to get you anywhere. You don’t give people a reason to care about what you’re saying so they’ll disconnect, even if you keep it short.

Through his articulation of his points, Churchill gained his audience’s attention.

Consider this passage in his speech, which comes after he outlines his nation’s goals on the eve of its greatest battle.

“At any rate, that is what we are going to try to do. That is the resolve of His Majesty’s Government-every man of them. That is the will of Parliament and the nation.”

This highlights Churchill’s rapid-fire delivery. Short and concise sentences, each of which tells the listener something. He’s not oversimplifying anything. He remains eloquent and articulate throughout while delivering blunt statements.

Through this, Churchill maintained the attention of his audience. He established a rhythm for his speaking that propelled him along to the speech’s standout moment.

Tip #2 – Use Repetition for Emphasis

After an introduction that lasts little more than a minute, Churchill ramps up with the speech.

He launches into a statement of intent that defines his vision of Britain’s courage and ability to overcome all odds.

Churchill starts each statement with the phrase “we shall”:

“We shall fight on the beaches.

We shall fight on the landing grounds.

We shall fight in the fields and in the streets.

We shall fight in the hills.”

Note the use of short and concise statements again. This time, Churchill blends that speaking technique with his use of repetition. He delivers each statement with power, with “we shall” turning into a clarion call to his listeners.

It’s his trigger. It’s the one part of the speech that will stick in the minds of listeners.

Churchill’s message in this moment was an obvious one. He wanted to reinforce the notion that Britain would never surrender, no matter the odds that it faced.

But simply saying that wasn’t enough. “Never surrender” is a common enough phrase that it would have gotten lost in the ether of most people’s memories. If used alone, no-one would have remembered it.

Churchill focused on the words “we shall” and delivered multiple statements that defined how and where Britain would fight. In doing so, he ensured his message penetrated the negative emotion that pervaded in Britain.

Only after using this repetition to emphasise Britain’s strength and will to fight did he deliver the message that he wanted to deliver:

“We shall never surrender.”

Tip #3 – Build to a Strong Conclusion

As you can see above, Churchill used his speaking to build up to a memorable conclusion.

He termed this technique the “accumulation of argument”.

When you take the “We Shall Fight Them on the Beaches” speech as a whole, you can see how he uses it.

First comes his most important point:

“I have, myself, full confidence that if all do their duty, if nothing is neglected, and if the best arrangements are made, as they are being made, we shall prove ourselves once again able to defend our Island home, to ride out the storm of war, and to outlive the menace of tyranny, if necessary for years, if necessary alone.”

Churchill establishes his full confidence in his nation’s ability to win the upcoming battle.

He tells his people that they will win.

Next comes the evidence. You deliver the reasons behind why you believe the point you introduced at the beginning of the speech.

That’s where Churchill’s repetition came into play. This was not a man who believed in delivering subtle messages. He said himself that you have no need for cleverness when you have an important point to make. Churchill established his key thread and hammered it home.

You hit the audience again and again.

“Use a pile driver,” he said when discussing his speaking technique. “Hit the point once. Then come back and hit it again. Then hit it a third time – a tremendous whack.”

Then came the conclusion. In his famous speech, Churchill’s “We shall never surrender” line wasn’t the end. It was the launching point for a conclusion that is essentially a threat to the Nazis:

“We shall never surrender, and even if, which I do not for a moment believe, this Island or a large part of it were subjugated and starving, then our Empire beyond the seas, armed and guarded by the British Fleet, would carry on the struggle, until, in God’s good time, the New World, with all its power and might, steps forth to the rescue and the liberation of the old.”

Churchill’s not just delivering a message to his own people in this moment. He’s telling all who oppose Britain that they face an entire Empire who shall fight until they achieve victory. Even if Britain falls, the might of this empire will overwhelm the forces that oppressed them.

That threat also serves as a morale booster for his people. Churchill’s telling them that they are not alone and that support will come.

By the time he’s finished his speech, Churchill hasn’t just inspired his people to fight in the face of impossible odds. He’s shown them that there are those who will fight alongside them to even those odds.

It’s a technique that you can use in your own speaking. Show people why they must care by starting off with your most important point – your story.

Establish your key thread and hammer it home repeatedly. Then, show your audience a conclusion that inspires them.

Finally, it’s important to note that Churchill does not shy away from the gravity of Britain’s situation during his speech.

At all points he acknowledges the threat that Britain faces. In fact, he bases his entire speech around how Britain must overcome great odds.

And while he has confidence that this will happen, he’s not claiming that it will be an easy task. He’s not telling listeners that their victory will come without effort. He’s honest when showing his audience just how much of a toll the upcoming fight will take.

That’s important as it establishes his authenticity. If Churchill tried to paint a picture of a nation in its ascendancy in that moment, his audience would have disengaged. Britain found itself engaged in a struggle and Churchill needed to identify and confront that problem.

You can even hear it in his voice. Churchill sounds almost weary, much like the entirety of Britain felt at this point.

Yet there are moments where his voice rises to show that there’s still a desire to fight coursing through his veins. He uses his tone almost as a metaphor for the condition that Britain found itself in.

Tired, battered, but not defeated.

Churchill’s sincerity ensured that he connected with his audience. His conviction and confidence in the eventual outcome of the war inspired them.

Oddly enough, many of Churchill’s contemporaries considered him to be a poor speaker.

Yet his “We Shall Fight Them on the Beaches” speech shows a man in complete command of his abilities. He showed his audience a story that progressed from the difficulties they faced now to what he saw as their inevitable victory.

He was sincere throughout. Churchill knew that Britain would have to fight hard to achieve that victory and he didn’t hide that fact from his audience.

Churchill kept his speech short while delivering all of his messages. He used repetition to reinforce his key thread that Britain would never surrender.

Through his speaking, Churchill helped to inspire a nation to victory against enormous odds.

That makes him an inspiration for any aspiring speaker.

Speakers Institute can help you to refine Churchill’s techniques so that you can inspire in the same way that he did. Do the following to begin your journey towards becoming a storyshower: