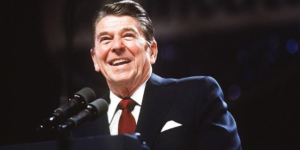 Ronald Reagan may have been one of the world’s best speakers. He even earned the nickname The Great Communicator. But it’s one of his most tragic speeches that gives us true insight into what you can learn from him.

Ronald Reagan served as President of the United States during much of the 1980s. But before that, he was an actor.

His previous career called on him to assume different characters and make audiences believe in them. He had to convey emotions that he may not have felt in an effort to encourage an emotional response from his audience.

He’s sure to have taken some lessons from his acting career into his presidency. And during those eight years, he developed a reputation as a great speaker.

But unlike in his acting career, it was his authenticity that helped him to build his reputation.

Reagan was a speaker who always had great command over his technique and his message. And his greatest moment may have come during one of the biggest tragedies to befall the United States during his presidency. 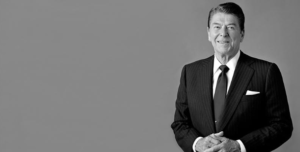 On January 28th 1986, millions of Americans sat down in front of their televisions to watch the space shuttle Challenger launch.

By this point, the launching of space shuttles had become almost routine in the minds of the American public. But this event was different.

This shuttle had a civilian on board.

Christa McAuliffe wasn’t an astronaut. She was a schoolteacher from the state of New Hampshire. She joined the crew of the Challenger with the aim of being the first teacher in space. While there, she hoped to demonstrate Newton’s laws of motion so that millions of children could learn from her adventure.

Her courage sparked interest across the nation and encouraged millions of people to watch the launch.

The shuttle launched with seven crew members on board. It then exploded on live television only 73 seconds into its flight.

A nation that had only a minute prior found itself filled with hope instead found itself grieving after a great tragedy.

President Reagan had the unfortunate task of delivering his State of the Union address in the aftermath of this tragedy. The speech he delivered resonated with the millions of Americans who shared in his grief after such a terrible occurrence.

What made Reagan’s Challenger speech so powerful?

This analysis shows the techniques Reagan used to deliver a tragic message in a way that resonated with his audience.

Technique #1 – Bare Your Emotions in the Wake of Tragedy

If your audience doesn’t believe in the emotions you’re displaying, you’ll lose them. When showing your story, you need to show people how you felt in that moment.

In Reagan’s case, he’d prepared an entire speech for his State of the Union. But the events that unfurled just prior to his speech led to him making a complete change. Instead of delivering his prepared speech, he spoke solely to a nation grieving for the loss of seven astronauts.

Most importantly, he makes no effort to hide his own grief during his speech. He’s upfront about his emotions at all times.

During the introduction to his speech he says: “Nancy and I are pained to the core by the tragedy of the shuttle Challenger. We know we share this pain with all of the people of our country. This is truly a national loss.”

It’s simple and to the point. There’s no effort to hide behind bravado or put a brave face on what has happened. Reagan bares his emotions within seconds of starting his speech. He also empathises with his audience.

This allows him to build a connection to the listeners. In this moment, he’s not the President of the United States. He’s a human being and an American citizen who’s as hurt by what has happened as everyone that he’s speaking to.

Speakers Institute founder Sam Cawthorn also makes it a point to bare his emotions during his speaking. Sam lost his arm in a motor accident and that tragedy often forms the foundation of his speaking. Much like Reagan, he shows his audience the emotions he felt, and still feels, because of his own tragedy. Sam doesn’t hide behind humour or attempt to present something disingenuous.

For Reagan, the aftermath of the Challenger explosion was not a time to demonstrate his authority. It was a time to share in the grief that his nation felt. That’s how he connected so quickly with his audience.

Technique #2 – Find Hope Where Others Can’t See It

While Reagan’s emotions and relatability allowed him to create a connection with his audience, he still needed to guide them. His position meant that his listeners looked to him to figure out what to do next.

Reagan used this to quell any feelings of discontent that the nation may have felt towards its space program in that moment.

“We’ll continue our quest in space. There will be more shuttle flights and more shuttle crews and, yes, more volunteers, more civilians, more teachers in space. Nothing ends here; our hopes and our journeys continue.”

Reagan switches to presidential mode in this short passage. And in doing so, he reaffirms a nation’s belief in its space program. While what happened was a tragedy, it would not prevent America from striving to push scientific boundaries forward.

It would not be accurate to say that Reagan identified the good that came out of the tragedy. But he did provide a sense of direction and a way to move beyond it. In doing so, he created hope for the future where others may have struggled to see any.

In your own speaking career, you may encounter many people who look to you to provide solutions to their problems. You have to empathise with their problem before providing a solution – or hope – to them.

Reagan also knew that he would address several audiences with his Challenger speech.

He wasn’t just speaking to the adult American voters anymore. Reagan spoke to the schoolchildren who’d watched the launch in such anticipation. He also spoke directly to the families of those who lost loved ones in the tragedy.

A true masterstroke of the speech is how Reagan managed to address a nation while giving the speech a personal touch. He addresses the families of those lost and empathises with their struggle:

“For the families of the seven, we cannot bear, as you do, the full impact of this tragedy. But we feel the loss, and we’re thinking about you so very much.”

Later on, he addresses the children who may have felt traumatised by what had happened:

“And I want to say something to the schoolchildren of America who were watching the live coverage of the shuttle’s take-off. I know it is hard to understand, but sometimes painful things like this happen…The future doesn’t belong to the fainthearted; it belongs to the brave.”

He also addresses NASA directly. Plus, some consider his words about America’s determination to continue exploring space as a message towards the Soviet Union.

He delivered individual messages to each audience. In doing so, Reagan created an emotional connection with all listeners.

You may have to do something similar with your own speaking. Your audience members may not all share the same problems, concerns, or viewpoints. The story you show has to account for the various audiences that you wish to engage.

Technique #4 – Use Body Language to Express Your Emotions

This final technique moves away from the words Reagan delivers. Instead, it looks at how he carried himself during the speech.

His face told the story even if you didn’t listen to his words. He was clearly a man in grieving.

Reagan’s slightly downturned mouth demonstrates how upset he is. Similarly, the contraction of the muscles in his forehead show that he’s struggling to come to terms with his own thoughts.

His face has grief etched across it. While it doesn’t look like he’s going to break down during his speech, it’s clear for all to see how he felt while delivering it.

However, his demeanour changes subtly when delivering important messages. For example, his features take on a steely resolve as he talks about America’s determination to continue exploring space.

Throughout the speech, Reagan uses his body language to convey his emotions. There’s no bombast in the way that he presents himself. He’s grieving in the same way that his audience is. Yet his shoulders remain straight and his head held high. Reagan’s body language demonstrates strength in the face of tragedy as well as the grief he feels.

This shows us the importance of how you make use of your body when speaking. Your body language must be in keeping with the story you’re showing people.

When displaying your vulnerability, you can’t allow awkward smiles and other gestures to detract from your story.

But when you’re being more light-hearted, you must loosen up accordingly.

Your body language is as important as your words when you’re speaking. 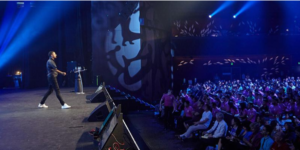 Ronald Reagan was The Great Communicator and the Challenger Speech was likely the toughest speech that he gave.

Reagan demonstrated his grief and vulnerability throughout his speech. Yet he maintained the strength people expect from their president. He addressed multiple audiences and delivered messages to each of them.

Perhaps most importantly, Reagan found hope in the face of the tragedy. He spoke of courage and perseverance at a time when an entire nation felt lost.

This is just one example of the many great speeches that Reagan gave during his career. There’s a lot that you can learn from all of them.

Speakers Institute can help you to harness the techniques that served Ronald Reagan so well. We encourage you to do the following: