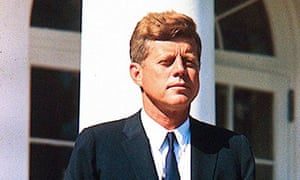 JFK is world-renowned as one of the greatest leaders in American history. Part of his strength came from his ability to influence others by showing his story.

In the annals of American history, there are few presidents as revered as John F. Kennedy (JFK). Though his time in power was brief, with a tragedy bringing his life to an end, he inspired millions of people.

Many look to JFK as one of the greatest orators of all time. His speeches still inspire people to this day. Many look to them for inspiration when attempting to craft their own speeches. Everything from the way he spoke through to how he carried himself has been the subject of intense study.

JFK built this reputation because he was more than just a storyteller. JFK was a storyshower who had the power to unlock the emotion behind his words so that he could inspire others.

JFK’s inaugural address offers up a great example of the many techniques that he used to show his story. Here, we’re going to take a look at a few snippets of that address to unveil some of the reasons why JFK has his reputation. We’ll also look at some of the other reasons why JFK was such a great storyshower.

Contrasting two opposing viewpoints can do a great deal to inspire emotion in your audience. The contrast forces the listener to truly think about what you’re saying. Instead of telling them something, you’re showing them two alternatives. From there, they have to consider your words more closely to understand the meaning behind them.

JFK used contrasts to great effect throughout his inaugural address. However, no instance was more powerful than one of the most famous lines from the speech:

In this brief moment, JFK introduced a contrast that directly challenged his audience’s thought process. He forced them to stand up and take notice, as this was a speech that could change how they thought about life.

Contrasts also mirror the way that the human mind works. Whenever you think of a situation or an action, your mind considers alternatives. For example, you may think of the “best” and “worst” case outcomes from an action.

By using contrasts to his advantage, JFK’s speeches encouraged people to think deeply about his words.

Reason #2 – He Made Excellent Use of Tone

Vocal tone plays a huge role in how people take your words in. JFK was a master of matching his tone to the message that he hoped to deliver.

Again, we come back to the famous “Ask not…” line.

When listening to JFK’s delivery, you will note that JFK says “Ask not” with much more force that the rest of the statement. He uses a higher frequency to capture the listener’s attention before delivering the message that he wants to influence them with.

This is just a small example of how JFK used tone to show his story. At various points during his inaugural speech, you will notice him vary between speaking softly and forcefully. You will note that he includes pauses to allow his words to resonate with the listener.

JFK used tone to emphasise the most important parts of his speeches and stories. This allowed him to draw attention to what he wanted to show people.

Repetition can be a powerful storyshowing tool, when used correctly. It allows you to emphasise the key points of your story. However, overuse can make your speech come off as redundant.

JFK’s inaugural speech offers an excellent example of how to use repetition to great effect. About half way through the speech, JFK settles on the phrase “Let both sides…” as the subject of his repetition.

He then goes on to deliver four crucial points of his speech. In each case, he uses the repeated phrase to punctuate the deeper message that follows:

“Let both sides explore what problems unite us instead of belabouring those problems which divide us.

Let both sides, for the first time, formulate serious and precise proposals for the inspection and control of arms–and bring the absolute power to destroy other nations under the absolute control of all nations.”

This is JFKs call for a unity that will transcend the political divides that become most potent during a presidential race. With the race settled, JFK calls on all Americans to join with him in a combined effort to achieve more.

In this case “Let both sides…” allows JFK to address everybody listening. With their attention captured, he is able to show everybody what he hopes to achieve.

The speaking industry has evolved in recent years. Greater value is now placed on getting your message out there quickly and concisely.

You have to dig into the roots of your message to show your story effectively. There can be no pontificating around your points if you are to engage your audience.

JFK’s inaugural speech offers an excellent example of this. Clocking in at just over 1,300 words, the speech lasted for less than 15 minutes. But in that time, JFK used his storyshowing ability to unite a nation.

Imagine if his speech had run for double that amount of time. Eventually, the story would have gotten lost among filler and content that didn’t focus on the key messages that JFK wanted to deliver.

Reason #5 – He Made His Audience the Subject

Throughout his speech, JFK regularly associates himself with his audience. He may be their president. But he does not hold himself above them while speaking.

He uses the word “us” to create a connection between himself and his audience:

“Let us never negotiate out of fear.”

“Now the trumpet summons us again…”

“Together let us explore the stars, conquer the deserts, eradicate disease, tap the ocean depths and encourage the arts and commerce.”

Rarely will you find him speak of himself in the first person during the speech.

This technique served a powerful purpose with his inaugural address. JFK wished to show his audience that he hoped to unite them. Instead of telling them how he intended to do this, he showed them what would be possible together.

Whether this technique works for you depends on the subject of your speech. If you’re showing people your own story, there are fewer opportunities to make the audience the subject.

However, this technique does highlight the importance of connecting with your audience. It shows the vital nature of including them in the story in order to engage them. By using the word “us” instead of “me”, JFK connected directly with his audience. 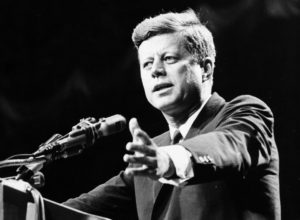 Reason #6 – He Used Body Language to His Advantage

Many people do not know that JFK struggled with several medical conditions during his presidency. A combination of back problems and Addison’s disease left him in constant pain. At times, he could only walk with the aid of crutches.

Many don’t know this because Kennedy didn’t show it. In fact, those who have observed him speak note that he made excellent use of body language. JFK would stride into rooms confidently and open himself up to his audience.

His performance during his debates with Richard Nixon showcased this ability too. JFK was at once powerful and welcoming. He exuded an aura of competence while also showing his audience that he was one of them and understood them.

But he never showed them his biggest vulnerability.

Vulnerability can be a useful tool to help you connect with your audience. But in JFK’s case, he was a man in a position of great power. Too much vulnerability could leave him seeming weak, which would not inspire confidence in his audience.

JFK used his body language to convey an aura of strength. He used this to his advantage to capture an audience’s attention so that he could show his story.

We come back to JFK’s inaugural speech to demonstrate the final reason why he was such a powerful storyshower.

JFK imbued his speech with an authenticity that most cannot replicate. He truly seemed to believe every word that he said about uniting the nation.

The words he spoke, and the underlying mission, seemed to come straight from his heart. He delivered them in a forthright way that helped the listener understand exactly what he wanted to achieve. There was no room for fakery or misplaced sentiment. JFK’s inaugural speech was a statement of intent.

This proved particularly powerful in the political realm, where authenticity is in short supply. JFK wasn’t looking to placate the people with meaningless words. He wanted to show them what was possible if they would unite under his vision.

JFK didn’t just dry recite a bunch of words on a page to his audience. In every speech, but particularly during his inaugural address, he showed people his vision for the United States.

JFK used his body language to convey a sense of strength and openness. He used storyshowing techniques, such as repetition and making his audience the subject, to get an emotional response. He spoke with authority and authenticity while making excellent use of tone.

Finally, he never outstayed his welcome. JFK got to the heart of his message quickly.

With the right guidance, you can become a powerful storyshower in the same vein as JFK. Speakers Institute can show you the way. We recommend that you do the following:

With Speakers Institute, you’ll learn how to become a powerful and influential storyshower.