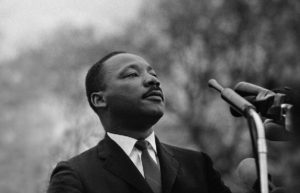 Turning a struggle into an engaging story is not enough to inspire others to believe in a shared dream. You need to show them the story.

Martin Luther King Jr. had a profound impact on race relations in the United States and beyond. His inspirational speeches and peaceful activism empowered the Civil Rights Movement.

King was a key figure of the Montgomery Bus Boycott of 1955 that ignited the fight for racial equality. In 1963, he was at the forefront of the March on Washington. At the capital, before more than 200,000 people, he made one of the greatest speeches of the 20th century.

Today, King’s lasting influence transcends the realms of race and politics. His speeches continue to empower people to believe in shared dreams. But of all his speeches, “I Have a Dream” is the one that most resonates with us today.

And if you aim to be the best storyshower you can be, you really need to study it.

King kept working on his speech as demonstrators were gathering before the Lincoln Memorial. He worked with his advisers to put the final touches on an inspiring speech. The occasion was momentous. The march had a great aim – to pressure the United States Congress to pass a new civil rights bill.

King was the 16th on a programme that included nine other speakers. When his turn came, he began to read his drafted speech like a lecture. The reaction was far from ecstatic.

“I Have a Dream” was probably not the speech that King intended to deliver. He had delivered it before. He knew it by heart.

But his adviser Wyatt Walker had told him not to use it, calling it “trite” and “clichéd”.

As he neared the end of his drafted speech, the gospel singer Mahalia Jackson, who was behind King, urged him to “Tell ‘em about the dream, Martin.”

Why did King listen to her? Why did he launch into “I Have a Dream?”

In his speech, King did not tell a story of freedom. He did not simply enumerate the difficulties that the African American community was facing. Instead, he opened a window of understanding in those who listened. He showed them a story of a man embroiled in the struggle of his race.

This is the reason why we still remember King’s speech today.

“I say to you today, my friends, so even though we face the difficulties of today and tomorrow, I still have a dream. It is a dream deeply rooted in the American dream.”

King’s word choice and the eye contact that he made with his listeners helped to convey a story that was not only his own but the story of a race and of a country. His forceful but exact delivery made his story flow through him and into the hearts of his listeners.

King did not report facts that all those gathered knew already. Instead, he built empathy and engagement. However, this doesn’t mean you can’t introduce facts into your speeches.

You can toggle between facts and telling a story to make your speech more engaging. Use dialogue and take your audience on a journey to a meaningful transformation. Above all, show how your story resonates with your audience.

Tip #2 – Be Unapologetically Yourself

King stood up and shared the story of his race, and by implication, of his own struggles. In one of the most famous parts of his speech, he said:

“I have a dream that my four little children will one day live in a nation where they will not be judged by the colour of their skin but by the content of their character.”

That statement is a deeply personal one. It hints at the vulnerability of his dream. Because throughout his life, others had judged King by the colour of his skin.

When you open yourself before your audience and admit your vulnerability, you connect with them on a deeper level.

As a speaker, you are often on a platform or podium that’s higher than your audience. But to truly connect with them, you must never forget that you walk among them. You are vulnerable like they are, and if you speak about your vulnerabilities, they will understand.

Tip #3 – Give Your Speech the Right Cadence and Rhythm

If you have watched the recording of the “I Have a Dream” speech, parts of the speech may strike you as slow. Despite the passion with which he speaks, King did not rush to deliver his speech. He gave his speech the right cadence and rhythm at the word level.

Cadence and rhythm are something that every speaker uses, consciously or not. However, less experienced speakers may not apply them as scrupulously as King did. If you think of the cadence of a speech at the sentence-level, you may rush your speech.

But King lingered on individual words and phrases to make the pauses between words more meaningful. When he needed to make a strong point, he used repetitions to enforce his message. To increase the power of his speech, he alternated longer, slower sections with brisker sentences.

“I have a dream today,” he said, and then paused. He continued with a longer sentence, “I have a dream that one day every valley shall be exalted, every hill and mountain shall be made low.” After this he used a shorter, blunter delivery: “This is our hope.”

In his build-up to one of his most famous sentences, Martin Luther King used anaphora. This rhetorical device refers to the repetition of words at the beginning of consecutive sentences:

But King did not use anaphora merely as a rhetorical trick. He did not use it to grab attention but to stress a belief. The belief that the time for change has come, and with it, the importance of the present moment.

By the time he used this device, his audience’s eyes were already riveted on him. He used it naturally when the cadence and the rhythm of his speech invited it.

Furthermore, he did not overuse it. He put it aside at the right time and allowed for longer stretches of slower, less nuanced but no less forceful expositions.

Repetitions help reinforce your point and give rhythm to your speeches. Use them to make your speeches more inspiring.

King’s speech was rich with vivid metaphors. This is one of the reasons his speech had a mesmeric quality to it, despite its apparent slowness.

“But we refuse to believe that the bank of justice is bankrupt.”

Metaphors are an integral part of any story. They broaden and deepen the meaning of your words. They help you to show your story.

“Now is the time to lift our nation from the quicksands of racial injustice to the solid rock of brotherhood.”

While King’s speech had an immediate impact, it needed time to secure its place in history. But it’s in no small measure due to these metaphors that it endures in our minds today.

Whether you are speaking at a corporate event or before a crowd, make room for vivid metaphors in your speech. Let poetry and literature inspire you.

Tip #6 – Give Your Speech a Beginning, a Middle, and an End

At the beginning of his speech, King turned back the clock:

“Five score years ago, a great American, in whose symbolic shadow we stand today…”

He then gradually built up his speech to that day in August 1963. He drew attention to the importance of that historic moment:

“Now is the time to make real the promises of democracy…”

He finished his speech with a hopeful, emphatic message, one that called for a better future:

Structure your speech like a story. Plan it with a beginning, a middle, and an end in mind. In this way, you can build your speech to a resolution that has a forceful impact on your listeners.

This approach will help you show your story rather than simply tell it. It gives your speech a shape to which you can add details and incorporate stories. 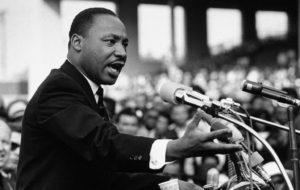 Martin Luther King Jr. delivered his speech with passion. But he mastered his passion, even restrained it, so that it would not distort the cadence of his speech.

It’s not the ebullient passion of a salesman on a cold call. Rather, it’s the passion of a man who believes in his convictions.

A less experienced speaker may confuse passion with a quick delivery. Perhaps even with verbosity. But King’s passion stresses every world and imbues even the silence between words with meaning.

So that, towards the end of his speech, when he calls all who listen to action, we truly believe him:

Martin Luther King Jr. was not a storyteller. He was a storyshower. Using words, body language, and meaningful pauses, he told the story of a race at a turning point in its history.

Becoming a storyshower is a process. It calls for more than using certain rhetorical devices or speech structures. Speakers Institute can help you become a storyshower.